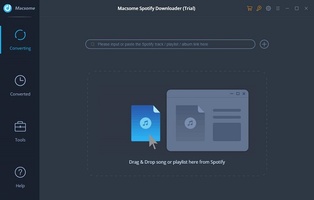 Advertisement
Macsome Spotify Downloader helps users download the Spotify tracks and convert them to MP3, AAC, FLAC, AIFF, and WAV audio format to play the downloaded Spotify audio files on kinds of media players as they like.

After the conversion, with ID tags kept, users won't mess with a large number of music files because while converting Spotify audio tracks, users will get almost all ID3 tags, including title, artwork, artist, track number for organizing your music library.
Reviewed by Álvaro Toledo

It is a fantastic program. With it, I can play almost favourite songs on my iPod classic. Nice tool.

WO Mic
Use your smartphone as a microphone
ZaraRadio
Soundop
Edit, mix, and record, all with the same application
Oooplayer
Listen to your music with a player that's lightweight and simple
1by1
Amazing lite mp3 player
mrViewer
View any image format on your PC
Universal Media Server
Turn your PC into a multimedia center
Mp3TagsForTracks